Our Annual Sheep Shearing School will be taught once again by Shaun Fajnor.  His expertise and exceptional instruction will get you started shearing and will also make you want to come again to gain extra pointers!

***The course is now full, but you could contact us to be put on a waiting list in case of a cancellation.***

The first day you will be instructed on equipment and how to use it and the care of it.  Then he will get you started on the steps of shearing. You'll begin working on your own, gaining skills!  The second day is the real work out and practise day. By then you will start feeling like you know something.

Snacks and Meals are provided for the 2 days........2 coffee breaks and a warm lunch.  And everyone is ready to have that break and enjoy each others' experiences and what they have been learning.

Arrange your own accommodations from any hotels/motels available in Lethbridge, which is a 10 min. drive from our farm. We are closest to the south end of Lethbridge, so look along Mayor Magrath Drive S. or on Hwy. #4.

The cost for the 2 day course is $275 + gst for a total of $288.75 which can be paid for by cheque or an e-transfer. Payment for the course reserves your spot.  Please email us using the "Contact Us" on this website to register.  There is a maximum of 14 students accepted each year.

Should you need to cancel?  $50 would be held by us and the balance refunded.

If the weather is just way too cold and WE need to cancel, we will reschedule the course for June once we wean the Lambs. (This hasn't happened yet, but one never knows.)

Sheep at J and M Farms near Lethbridge wait patiently to be sheared. | Barb Glen photo

The 26-year-old lives on a sheep operation near Hays, Alta., where the family has a flock of 800. In a few days, she and her brother and father will shear 200 of those sheep, but this year they’re also bringing in a ringer — professional shearer Shaun Fajnor.

Preston took Fajnor’s shearing course April 7-8, which was hosted at J and M Farms south of Leth-bridge. She isn’t new to shearing, but some independent instruction seemed like a good idea.

“It’s very difficult, learning from our dad. The joke is that I was the only one stubborn enough to put up with it, or determined enough, I guess,” Preston said, while tugging on a red sweater bearing holes from wayward shears.

“My family is third generation sheep producers. My grandfather out in Ontario, my dad and now my brother has them, too. So I’ve been around shearing my whole life.

“I’m here to fix some of my footwork and get a little bit faster. Shaun’s actually going to come out and between him, my dad and I, we’re going to do 200 animals in one day, hopefully. I think Shaun could do them by himself.”

Fajnor, who lives in Taber, Alta., has been shearing for years all over the world. He can shear a sheep in about 90 seconds on a good day, or within two minutes if he doesn’t particularly hurry.

“It’s fairly average,” he said about his shearing time per sheep.

“In Canada it’s not too bad. You go overseas and I’m just kind of a beginner still. I’m kind of average at best.”

This seems a bit modest to an observer because Fajnor easily handles sheep while instructing 15 beginners in the proper way to hold the animal, grip the shears and remove the wool.

It’s a display of physical strength involving strong arms, a bent back and hand-eye co-ordination.

“Typically as a professional shearer, you do this for eight hours a day. So we’re doing 200 plus sheep a day. It’s a bit of physical exertion,” said Fajnor with what appears to be typical understatement.

Nicholas Zachoda of Lamont, Alta., wants to become a professional sheep shearer, which is why he took the course. He initially learned how to shear each part of the sheep and on the second day tackled the whole animal at once.

Fajnor said he learned that teaching technique in Australia and New Zealand, where he still takes shearing courses and learns from the masters.

Shearing schools are the best and perhaps the only way to become skilled, he added, so that’s his advice for those who are interested.

“Come to one of these schools. Go to shearing school. That’s how I started,” he said.

“Without someone to show you, it’s near impossible. You can’t learn just watching YouTube.”

The barn is noisy with the sound of electric shears, but the sheep themselves are mostly silent. Once grabbed and sat upon their backsides, they remain relatively docile while the shearing takes place.

“Controlling the sheep is the hardest part,” said Fajnor.

Brenda Critchley of Calgary found that out the hard way when one exuberant ewe threw her to the barn floor — twice.

“They weigh more than I thought,” she said.

“It is a physical thing, dragging them and getting them into position. You’ve got to be able to finesse them, if you’re a small not so strong person, but you do have to have a little bit of strength.”

Fajnor said good shearers can travel the world plying their trade. In fact, that’s necessary for Canadian professional shearers because the domestic flock is small.

There might also be a competitive streak in those who love to shear. That’s the case for Preston, along with the social aspects.

“I’m competitive and I like being able to say I can do something no one else can do. And it’s a family thing,” she said.

“For us, shearing sheep is like a giant family event. We usually shear over Christmas holidays because we lamb early and we want to get that Easter market for the lambs.

“So we ‘re shearing over Christmas so everyone’s home. We get the boyfriends and cousins and people out. It’s like the equivalent of branding for a lot of cattle farmers. You just make a big party out of it. I’ve got a lot of memories associated with it.”

J&M Farms in Lethbridge County, will hold their 4th Annual Sheep Shearing Course March 22-23 from 8 a.m. to 5 p.m. each day.

The course costs $275 plus GST and will give people the opportunity to learn from expert, Shaun Fajnor, about how to properly shear sheep.

“We take about 14 students in each time so that they all have one on one time with the instructor and he teaches so well,” Margaret Oosterhof, co-owner of J&M Farms, says. “Everyone has been thoroughly thrilled to be able to come and learn how to shear sheep.”

Oosterhof says that once the sheep are sheared, the wool is all bagged and compressed into burlap bags. After that, a machine presses it all and then it is brought to Woolgrowers. Sheep, Oosterhof explains, need to be sheared at least once a year so their wool doesn’t grow too long; if a sheep’s wool grows too long, they overheat. It’s also nicer for lambing to have been shorn before.

Oosterhof adds that the art of shearing sheep and the process of handling sheep is such a fascinating thing that there is usually a waiting list for the course each year.

To register for the course, contact Jim or Margaret Oosterhof at 403-317-0330 or jmfarms@look.ca and mention ‘sheep shearing school.’ 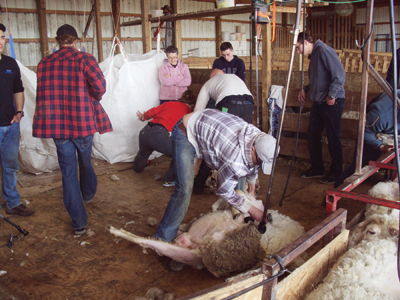 Apr. 7-8, 2017
According to J & M Oosterhof Farm, the Sheep Shearing School event has come and gone and overall a successful event was held.
Fifteen students came from all over Alberta, the interior of B.C. and Vancouver Island. Four women and 11 men ranging in ages from 15–60.
Setting up the equipment, general holding pen, and alley were the beginning of the morning. Shaun Fajnor, the instructor, introduced the pieces of equipment and demonstrated how to assemble them. Variety and care is essential in knowing what works most efficiently for each person and situation.
Following morning coffee, students were taught how to properly handle a sheep for shearing — a task that will take much practice to become an expert at. Some initial shearing was started with students learning how to open the belly and crutch ewes.
Shaun’s technique of teaching by breaking the sheep into five sections, allowed students plenty of opportunity to practice their footwork and handling ability, without being overwhelmed trying to remember the whole process from the start. The bellies of the young ewes were finished at lunch time, and the interest was peeking at how much energy and skill is required to shear sheep.
Relationships built quickly with some of the students, as they worked in teams to handle and share the shearing tasks.
Skill levels and care are noticed when handling the sheep. Sheep are definitely a unique animal to work with if you haven’t had any experience before.
A lunch of Shepherd’s Pie made from ground lamb was a welcomed warm meal on a cool day.
After lunch, the teams were back at it learning how to do the bodies — beginning with one side and later finishing the animals off. A tired bunch gradually left to get some well needed rest before coming back for the second day of training.
Early the next day, the eager students went about finding out how much they were able to retain from day one — adding some more confidence and practice into the second day.
Once they started on the older and larger ewes, some of the strength that was needed to handle the sheep was definitely tested, and a lot of practice, demonstration, and instruction helped to conquer and finish the final day.
Breaks were definitely welcomed and great conversations of their experiences were shared the entire time.
Red faces and sweat was a sign of accomplishment on the students that were working hard, and muscles that aren’t used regularly were telling their own stories.
All in all, it seemed to be a huge help to each person, as they left, feeling they had gained some knowledge and ability to shear sheep.
They also learned it takes practice to succeed, and no one is exempt from needing more practice and care, as they handle sheep to be shorn.
If you are thinking about coming next year, don’t wait too long to register, as there were people turned away after the list was full.
Allison Preston (shearing student) and Margaret Oosterhof (host)